Gift Ideas for Each Birth Month Because in this post, we're going to make life easy for you by curating a list of gifts inspired by the gemstones (relax, we're not asking you to buy gems as a gift😂) and personality of people born in each birth month! For all 12 months, discover flowers based on a month's birthstone colour and another gift based on that month's babies' personality! January's birthstone is the beautiful garnet, more specifically, it's the deep red variety of garnet! The fiery colour coincides well with January babies' typically independent nature. They're always ambitious and want to try out new things for themselves! This makes a preserved flower dome with deep red roses coupled with a duffel bag perfect for those born in January. (My personal favourite duffel bag is a black one from adidas!) The deep red roses represent a garnet and the duffel bag is for when they decide to travel by themselves! February's birthstone is one that is popular and commonly known - amethyst! This regal-looking gemstone comes in different shades of purple, from light to dark. Giving off an elegant feel, amethyst matches well with February babies' compassionate nature. So, for that empathetic person in your life, consider buying them a preserved flower bouquet featuring pastel purple roses (named after the gemstone itself) and a gift card to spa sessions so that they can finally pamper themselves after always looking out for others! Those born in March have the pretty Aquamarine as their birthstone! Aquamarine usually comes in a light shade of blue to blue-green, which is telling of its calming properties. The colour and properties of Aquamarine go well with March babies' peaceful and creative nature! To please someone born in March, a bouquet with preserved pastel blue roses named after the gorgeous gemstone won't miss! If you want to appeal to their creative side, get them a painting set for them to unleash their imagination! April's birthstone is one of the most sought after ever: Diamond! Bright and sparkly, this silver gemstone is commonly used to give that final elegant touch to many accessories. And just like how April's birthstone is beloved by many, April babies are outgoing and get along well with others easily, which means they usually have a lot of friends! What does having many friends means? Parties, of course😉! That's why for April babies, a bloom box of silver roses that represents their gemstone and a portable speaker for blasting music during sleepover nights with friends are good gifts! May is blessed with the beautiful green gemstone, emerald! Not an unusual gemstone, emerald is very popular for its rich colour. Green is also an earthy colour, which relates well to how May babies are down-to-earth and hardworking! For those born in May, perhaps an arrangement of flowers and foliage in cool tones and a couple of books are suitable gifts. Remember to get them a good mix of books from different genres! June's birthstone is the lustrous pearl! Pearl is unlike other gemstones as it doesn't particularly shine like them, but it does possess a very beautiful sheen. Just like how certain pearls are iridescent, June babies are emotional and full of life! These people who easily feel different emotions are sure to enjoy movies as we all know that to enjoy a movie is to fully immerse yourself in it and feel what the characters are feeling. So, for people born in June, we find that a bloom box of cream-coloured roses are reminiscent of their birthstone! You can also get them a portable projector to shine movies onto a wall so that they no longer have to watch movies on a small laptop screen! Regal with a mature charm, July's birthstone is none other than ruby! This beautiful crimson gemstone is also another more widely known one. Wearing accessories embellished with rubies may make us seem more mature, but don't be fooled, for those who were born in July are also humorous and can definitely land a joke! For that, we suggest a bouquet of preserved flowers - named after the gemstone itself - that features bright red roses as the main flowers and a deck of Cards Against Humanity for July babies! This party game seems to be made just for humourous people as they finish each round earning laughter from all around the table! The birthstone for August may not be as well-known as other gemstones, but it comes in a range of green shades that is sure to be pleasing to the eyes. August's birthstone is the green-hued peridot! Peridots can be anything from light yellowish-green to darker green. However, light green ones are more commonly associated with August. This perhaps relates well to how August babies tend to be more light-hearted and optimistic! And that's why we recommend a preserved flower dome with a light green theme as a gift for those born in August! Aside from that, a customisable lightbox is also sure to please these people as they can arrange it with different motivational quotes everyday! Another popular gemstone, sapphire, is finally making an appearance on this list! Sapphire is September's birthstone and I'm sure most of us know that this gemstone comes in gorgeous shades of blue. We usually associate sapphire with a darker shade of blue, and dark shades of blue project calmness. September babies are also known as the organised and collected bunch, which makes perfect sense! Hence, a preserved flower dome with a single dark blue rose and a desk organiser might just capture a July baby's heart! The month of the captivating and charismatic, October's birthstone - pink tourmaline - is every bit as dazzling as those born in this month! The pink shades of this pretty gemstone vary wildly - from light pink to hot pink! A bouquet of preserved flowers with pastel pink roses as the main flowers and dark pink foliage as accompaniment perfectly embodies the beauty of a pink tourmaline. For individuals born in October, a pair of sunglasses will also make them even more charming than they already are! November's birthstone is another widely popular one - topaz! This gemstone is most commonly known as and appreciated for the yellow and gold hues it possesses! Having such a brightly-coloured birthstone, it's no wonder November babies are so 'bright' too - 'bright' as in, people born in November are known for their intelligence! So, we thought that a bouquet of preserved flowers featuring pastel yellow roses would make a November baby happy! Also, if you're out to make their birthday an extra special one, buy a box of murder mystery (aka whodunit) party game, set up a birthday party revolving around that theme, and go ahead and let them and all party-goers solve the mystery together! This party game that requires critical thinking will definitely be a memorable one to any November baby! Last but definitely not least, we have tanzanite as December's birthstone! Tanzanite is perhaps not as commonly heard of, but it's an alluring blue gemstone similar to sapphire, maybe just a shade or two darker. There's no better representation of this blue gemstone than a preserved flower dome of blue roses - ranging from dark to pastel. The blue theme of this dome is also reminiscent of snow - which usually falls in December - and the Snow Queen, Elsa, herself! Contrary to the tranquility of tanzanite's colour, however, December babies - true to the festive month they were born in - are active and love to have fun! That's why we also suggest buying them tickets to your local amusement park for a day of laughter and joy!

With that, we hope that you now have some ideas on what to gift to the people in your life! If not, head on down to our blog for even more gift guides! You can also browse through the wide range of items we have to get inspirations!

If you have any questions or need any help, feel free to contact us via our website, email, Instagram (@anahanaflower) or via Whatsapp at +65 98569650. We're based in Singapore but can also deliver non-living items overseas. We also do same-day deliveries locally.

Your cart is currently empty.

You have successfully subscribed! Here's your coupon! "SUBSCRIBE5" at checkout
This email has been registered
Close
0
Recently Viewed
No Browsing History
Top

Let customers speak for us

Thought the overseas delivery is full of challenges, but the team commitment to show care and importance to ensure delivering is beyond words.

Well done to Ana Hana team effort for getting this through. 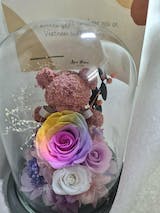 It was a wonderful experience. The flower bouquet was exatly as shown and it was delivered at the exact time as I had ask for. My wife was very happy with the gorgeous rose bouquet. Thank you for the fantastic experience

I couldn’t find a preserved bouquet mix that I wanted to gift my best friend. So I tried the Omakase Surprise Flower, giving them a description of what colours my friend loves and they nailed it! My best friend sent me a photo immediately, exclaiming how beautiful it was and she was so happy with it. I was amazed with the arrangement and really happy with their services. Thank you so much for making my first experience such a amazing one! 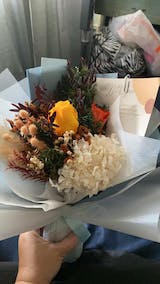 Let customers speak for us

Thought the overseas delivery is full of challenges, but the team commitment to show care and importance to ensure delivering is beyond words.

Well done to Ana Hana team effort for getting this through.

It was a wonderful experience. The flower bouquet was exatly as shown and it was delivered at the exact time as I had ask for. My wife was very happy with the gorgeous rose bouquet. Thank you for the fantastic experience

I couldn’t find a preserved bouquet mix that I wanted to gift my best friend. So I tried the Omakase Surprise Flower, giving them a description of what colours my friend loves and they nailed it! My best friend sent me a photo immediately, exclaiming how beautiful it was and she was so happy with it. I was amazed with the arrangement and really happy with their services. Thank you so much for making my first experience such a amazing one!